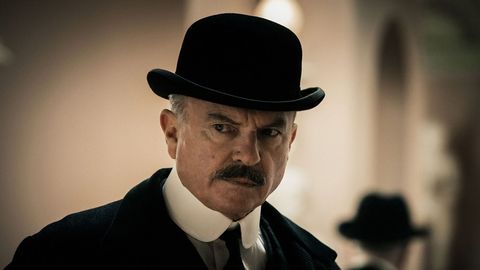 Last night, Esquire and Peaky Blindersim电竞官网- creator Steven Knight teamed up for a live watchalong of the season 5 finale. . It was spectacular, if we do say so ourselves.

The acclaimed writer/director took Peaky fans behind-the-scenes of the BBC show, delivering factoids and tidbits and secrets aplenty. He even revealed all of the long gone characters that he wished he hadn’t gunned down in previous seasons.

He didn’t give much reasoning on Aberama, but you can imagine that his bravery and thirst for revenge would have come in useful during the season six writing process. “I should have kept [Aberama] alive, I could have just wounded him,” Stephen said.

For Barney, Tommy Shelby’s first world war comrade who was committed to an asylum due to severe shell-shock and an unspecified crime, Knight spoke of his brilliant performances. "There’s him playing Barney Thompson (Cosmo Jarvis) who’s just brilliant and I really wish I’d kept him alive now because he’s such a good actor."

The same goes for Malacki Byrne, the IRA member who threatens and is subsequently killed by Tommy. "The other one is Tom Vaughan-Lawlor who played Malacki Byrne and it’s quite a small part but he just took it over and he was brilliant . . . but sometimes you have to do it because the story has to move on and there’s obvious examples of characters who’ve gone."

im电竞官网-And then of course there’s Sam Neil’s Major Campbell, who Knight wrote out of the show with a heavy heart.

"A great one was Major Campbell (Sam Neill) and I thought we'd got to the end of that duel between Tommy and Campbell and I was writing episode sixs of that series and I thought ‘I can’t just send the script to Sam Neill'.

"So, I phoned him up explained and he just said 'I don't want to die' so I said 'OK, I'll think about it' and did think about it and then a week later said 'I think we’ve got to to do this' and he was fantastic about it.

"But it’s a funny position where you create these people and then you have to kill them and it’s not nice."